The trouble with Bob

Bob was a fabulous technologist. He had a deep and precise knowledge of complex systems, was creative – and he was fast.  Bob devised innovative solutions to clients’ technical problems, saving both time and money. If Bob could so effectively solve complex problems, what was the problem?

The problem was Bob was a jerk.

He told one nervous client, “Your issue is not a crisis.  If you would quit asking me about it, I could get to it sooner.  Don’t call me about this again.” He was abusive to co-workers, telling one employee, “Your question is not only stupid, it’s also something I answered yesterday.  Why are you wasting my time?”  His sarcastic comments, abrasive manner, and harsh sense of “humor” succeeded in annoying nearly everyone around him. Bob’s raw talent, his technical expertise, had, thus far, allowed him to succeed as a technology team leader, despite his lack of interpersonal skills. But with the economy mired in a recession, being smart wasn’t enough. Bob was not only failing his team, he was failing to retain clients. Bob’s manager asked me to coach Bob, saying he needed to improve – and fast.

Everyone knew Bob needed to change, everyone except Bob.

When I shared the feedback I had collected about him from clients, peers, direct reports and others, Bob quickly said, “It’s not my fault that people are oversensitive.”  When I described some of the specific examples cited above, he said, “Oh, it’s not that bad.  People are really making a big deal over nothing.”  My attempts to coach Bob on his communication style failed because Bob was locked into his own way of thinking.  He simply couldn’t, or wouldn’t, see himself as other’s saw him. Until Bob changed his thinking, he could not solve his problem.

Turning to technology for help, I set up a video camera, and filmed Bob interacting with me as I variously played the roles of one of his clients, one of his colleagues, and one of his direct reports. Then I stopped the tape, and asked Bob to watch himself on video.

The effect was powerful.

For the first time, perhaps in his life, Bob stepped outside of the conversation and looked at himself from the outside in. “Now, I get it,” he said. With his own eyes, he was able to see how his behavior was causing the jarring conversations and negative feedback. Only when Bob’s thinking had changed to incorporate how others saw him, was he ready to work on how to change his communication.

Learn more about my book, I Hear You.

Do you have a challenge you want addressed in a future video? 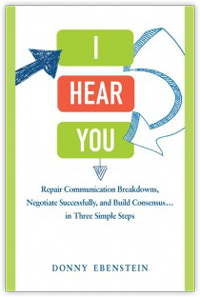